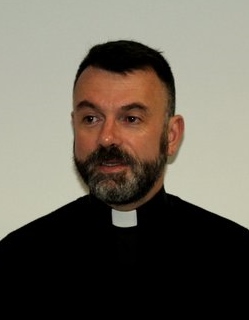 CHAPLAIN: Father Richard Seabrook SSC I was born in Essex and first felt a calling to be a priest when I was fifteen. After a short career in the City, I worked for the Missions to Seafarers in France and Australia from 1987–1989. I trained for the Sacred Priesthood at Chichester Theological College from 1989–1992 and in my final year was one of two seminarians from England at the World Council of Churches Institut Oecuménique, Switzerland. Ordained Deacon in 1992 and Priest a year later, I served two curacies in Cottingham and Hawley from 1992–1998. I became the Vicar of Hockley in 1998 and was a Proctor in Convocation on the General Synod of the Church of England. During this time, I did freelance work for BBC Radio 2 and 5 Live, including Pause for Thought. In 2005 I was invited to become the Rector of Benalla in the Diocese of Wangaratta, Australia and in 2009 became Vicar-General and Archdeacon of The Murray. For four years I was Administrator of the Diocese. I was a member of the General Synod in Australia. Since November 2015, I have been the Chaplain of Ss Peter and Paul, Torrevieja where I have oversight of our three churches within the one Chaplaincy. I enjoy travel, the arts, musical theatre and Spanish/Latino cultures.

Currently vacant (you may wish to say contact either Comms officer or church warden!)